A few words are worth a thousand pictures. 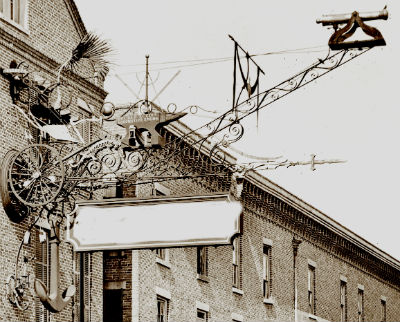 People love icons.  That’s true if by people you mean some designers, lots of decision makers and other folks who look at your website as a thing in and of itself.  Not so much people who have to use your web site.

I’ve used this image over the years to illustrate my point.  That, my friends, is the sign for a business.  Albeit a business in the 1860s, but a business nonetheless.  Usually I will ask folks to tell me what kind of business it is.  Also usually, they can’t.

It’s not that the sign is a bad icon for the business, it’s just that it’s difficult to interpret.  And, it doesn’t help that our context today is grossly different than that of 1865.  Once you know what sort of business it is, you’ll be able to deconstruct it’s meaning very simply.  That is, once you know the secret you will understand how the sign fits into their business.  But it doesn’t flow the other direction quite as well.

This is where the beauty of language comes in.  Words have an agreed upon meaning for the most part.  They don’t have to be decoded if you use plain language.  And, if we use metaphors judicially, they don’t breed confusion.

Use only icons that have universally understood meaning.  Generally that means you should never make one up yourself.  A floppy disk works as an icon for saving not because they were once things you saved data to, but because they are now understood to mean ‘save’ by a whole generation of people who have never seen one in real life.  In all other cases, rely on words to explain, visuals to provide structure and aesthetics.

You can find the unedited version of this image here.